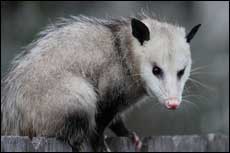 “There is an Opossum under my house or in my attic!” is one of the most common calls we get. These can be frightening little critters! Opossums are North America’s only marsupial, meaning they raise their young in a pouch. They don’t survive very long in the wild, rarely more than two to three years max. An opossum is a whitish or grayish mammal about the size of a house cat. Its underfur is dense with sparse guard hairs. Its face is long and pointed, its ears rounded and pointed. A opossums maximum length is 40 inches long; the ratlike tail is slightly less than half the total body length and is prehensile. Opossums can weigh as much as 14 pounds with males averaging between 6 to 7 pounds and females averaging 4 pounds. The head is usually 3 to 4 inches long and contains 50 teeth – more than any other North American mammal. Canine teeth are prominent. They have opposable thumbs, the male has a bifurcated penis, incredible immune systems, and are surprisingly intelligent. 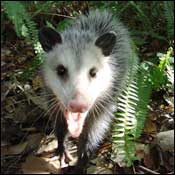 Opossums are found everywhere in eastern, central, and west coast states. Opossums are nocturnal. Opossums mate from January-July, then the tiny young find their way into the mothers pouch and grow, then cling to the mother’s back and eventually lead a life of their own. An average of 7 young are born. They prefer arid to moist, wooded to open fields. Opossums also prefer environments near streams and swamps. They will take up shelter in burrows of other animals, tree cavities, brush piles, and any other cover. And sometimes they den in attics and garages where they will make a messy nest! Opossums are omnivores, which means that they eat anything! Opossums prefer foods such as animal matter, insects, and carrion (rotting carcasses). They also eat considerable amounts of vegetable matter, especially fruits and grains. Opossums living near people may visit compost piles, garbage cans, bird feeders, or pet food dishes left outdoors. Opossums are nomadic and opportunistic animals. They sometimes will establish a home base, especially a female with young, and often in living structures. Opossums are not very fast, and will stand their ground when threatened. When threatened, an opossum may bare its teeth, growl, hiss, bite, screech, and exude a smelly, greenish fluid from its anal glands. In dire circumstances, they will sometimes feign death, or “play opossum”- they will fall over with their tongue hanging out. 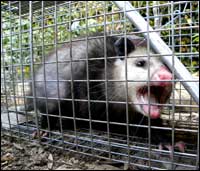 Because they are opportunistic scavengers, they can come into conflict with people and cause numerous problems. They can distress pets, and if your pet corners one, it can get a nasty bite. They can spread fleas and other parasites. Opossums can also carry rabies. As mentioned earlier, they will claim shelter in attics, under sheds or decks, gazebos, and in garages. Opossums that make it into your home, usually your attic, can be very destructive. They will use your attic as their personal latrine, leaving fecal matter everywhere. This is considered a biohazard. Most opossums die inside structures, attics or walls, and the smell of a rotting opossum body is horrible. Underneath your home, opossums can cause major insulation damage in crawl spaces. Weaver’s Wildlife Control is ecologically responsible, ensuring that only environmentally sound solutions and humane wildlife removal techniques are used for all Opossum removal situations. Don’t wait until that opossum damages your home!